Overcoming the Fear of Work 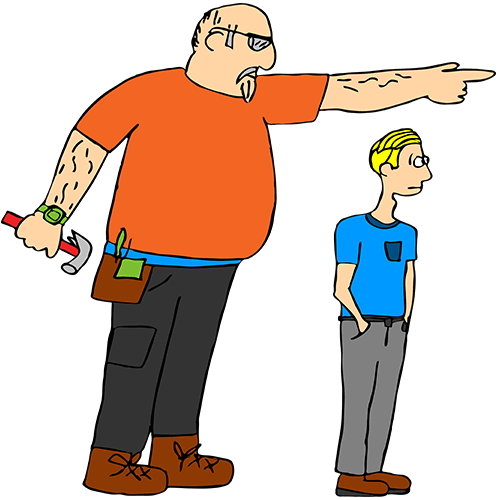 When I was sixteen, I somehow managed to get a good job working at a construction site over the summer. I would borrow the family car, drive to the location, check in with the foreman, and get to work. No, I wasn’t framing walls or completing electrical work or doing the finished woodwork. Nope. My job? Sweeping. And trash pickup.

If you’ve ever been on a construction site, you know that the workers typically toss their trash on the ground to be picked up later, rather than wasting time cleaning as they go. It can get messy pretty quickly, especially on bigger jobs. So I was the guy who would go around sweeping up the garbage piles and taking them to the dumpster.

At the time, I was trying to save up $10,000 for my full-time mission and another $10,000 for college tuition. I really needed the job. Plus, at the time, minimum wage was $2.75. And I was making a whopping $5 per hour—almost double the going rate. It was a big deal for me, and a huge opportunity.

I was excited and terrified at the same time. You see, the construction site was a giant 8-ward building for the Church of Jesus Christ of Latter-Day Saints. It had two chapels, two cultural halls with full-size basketball courts in each, and countless rooms on the first and second floors. There must have been 20 construction workers on site every day. And I had to clean it all. It was overwhelming to my little 16-year-old self. You might say I had a fear of work.

I recall one day showing up and getting the assignment to sweep one of the cultural halls with the full-sized basketball court. It seemed like an endless corridor of trash. I only had a push broom and a garbage can and was supposed to get to work. I thought it would take me all week. It was overwhelming, and I was terrified. I thought I wouldn’t ever get the job done, they’d fire me, I wouldn’t make enough money to pay for my mission, and…

Looking at that giant room, I remember thinking I couldn’t do it, that somehow I had bitten off more than I could chew. Maybe I didn’t belong there. They had made a mistake hiring me, and I was going to fail. That was probably the worst part: thinking I was going to fail. I hated that feeling. It made me sick inside. I could feel my stomach turning. It kind of felt like you do right before a big test: stomach in knots, sweaty palms, sweat on my forehead. Remember, I was only 16, this was my first manual labor job, and a lot was riding on this for me.

In reality, though, I did not fear working. True, I had had jobs before. I had a paper route since I was 13, and I know that helped teach me how to work. The problem was, that was only about an hour every morning. I had maybe 50 houses to deliver papers to, and then I was done. This construction job, on the other hand, was eight hours a day. It was full time.

Just Get To Work

So there I was, a skinny little 16-year-old kid, staring at the vast work ahead of me, feeling sick to my stomach, and then something clicked. I just decided to get to work. The floor wouldn’t sweep itself. I had to do it. It had to be me. Even if it took me all day. So I put my head down and started sweeping. I dragged my trash can behind me, filling it up as I went. Occasionally when it got too full, I took it out to the main dumpster and emptied it. I just swept and picked up garbage and swept and picked up garbage.

At one point, apparently I was making too much dust with my sweeping and one of the workers complained. They had me use something called “sweeping compound” – this red stuff that kept dust down, and I spread it out on the ground before sweeping. It really worked. No more dust.

I stood back and admired my work. What was a giant mess before was now a clean, organized, beautiful gym. I did it. It didn’t kill me. It didn’t take me all day. And I didn’t get fired. I was very, very proud of myself. I had overcome my fear, tackled what seemed to be an overwhelming task, and I had come off conqueror.

First, I learned that the job that seemed overwhelming was actually not that big. I had made it seem bigger and more daunting in my mind. I had turned a molehill into a mountain. Once I started working, the job became much more manageable and much smaller than I originally thought.

Second, I learned that I am a capable person. I had felt so sick that I couldn’t do it, that I was not able to complete such a giant task, that maybe there had been some mistake in hiring me to do this job. But once I started working, that fear quickly left. And then once I finished, I realized that the fear was completely unfounded. It was silly, actually.

Third, I learned that I really enjoyed working. There was a huge sense of satisfaction looking at the mess I had cleaned up. I liked the look of the clean floors and the parallel sweep marks left from the broom. It was a good feeling.

I continued working at the site until the summer was over and I had to go back to school. I don’t recall how much money I made (probably around $2000), but I think I got a lot more out of the experience than just money. Once I overcame that initial fear of the big job, I gradually developed work ethic. I learned to get to work. Just do it. And along the way, I remember distinctly actually enjoying myself. I would sing or dance or do little jumps or make games for myself while cleaning. Here I was, a young teenager, enjoying himself sweeping up messes at a construction site. What a sight that must have been!

I learned to love to work. That was the beginning for me. I no longer dreaded getting in there and just getting the job done. And it was empowering and exciting.

Now, as a parent, I want that same experience for my kids. That’s one of the main reasons we created Moneypants: to teach my children how to work. I think people by default are afraid of work. I watch as my kids struggle with the dishes, or the laundry, or the bathrooms. Those jobs are overwhelming to them. They seem like that giant hallway of trash did to me—insurmountable.

But as they work and just get in there and do it, something magic happens. Without fail, at some point they learn to stop dreading the job, and they just get to work. It’s slow at first, and after a few days sometimes they even forget they can do it, but then they get back in there and get to work, and the fear ends and the dread stops. Slowly they get more efficient at the job and it becomes easy for them. Then they start singing when they work or creating games like racing a sibling to see who could get done faster. And eventually, they start to take pride in their work, even to the point where they’ll get upset at a sibling or friend for messing up their job area. They take responsibility for the laundry, or the bathrooms, or the kitchen. It’s really neat to watch.

The solution to overcoming the fear of work is simple: just do it. Just get to work. There’s no satisfactory substitute for work.

So, how did you learn to work? When did it “click” for you? When did you overcome the fear of work? What was your moment? Leave a comment below.