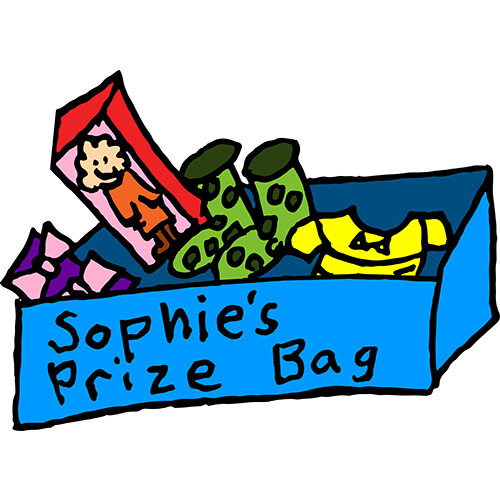 When my wife and I first started paying our kids cash for their jobs, we noticed a problem. Handing the older kids cash worked well, but handing the younger ones did not. We would give our four-year-old $2, and as soon as we turned around, the money was gone. Nowhere to be found. It was impressive. Paying cash to a toddler was akin to flushing money down the toilet. In fact, that may actually be where the money went! What to do? How could we still have payday but not lose the cash so quickly? How could we engender all the benefits of using cash and holding payday but avoid the missing money? It turns out that the solution is really simple: create a prize bag.

The prize bag is just a place to keep rewards for your kids to see. It’s like a treasure chest. Some people call it the family store. Whatever the term is, the idea is the same. The prize bag is a collection of already available rewards that your family members can earn.

So, we took our toddlers to the store and had them choose some items they needed (from their spending plan, of course), and bought the items for them. It was mainly clothing and toys. When we got home, we placed those items into a box we called the prize bag. (We probably should have called it the prize box.)

Then, on payday, we paid our littlest kids cash and then immediately walked them over to the prize bag. They handed their money over in exchange for the clothing or toy they had previously picked out at the store. We collected the money and paid back the family for the expense.

Some really cool things came from this.

Why Have A Prize Bag?

Since our initial attempt at using the prize bag concept, we’ve come a long way. Turns out, the prize bag isn’t just for toddlers. There are at least three good uses to have a prize bag for payday.

The first use of the prize bag is for those kids who haven’t quite made the connection between work and rewards.

A great idea is to spend one-on-one time with them and take them shopping. Take them to the store and let them pick out the items they really need and want. Then, you bring those items home and put them in the prize bag. You can get those items out during the week (maybe during job time) and set them on a nearby shelf. That way the kid can look at what they’re working towards. It’s a solid motivational tactic. Help them fill up their prize bag.

Then, once they’ve earned enough money to buy those items, you let them hand over the money. It’s now theirs. They earned it.

This works really well with toddlers and younger children. They like seeing their future prize. It helps them know you are serious about rewarding them. It’s like a pre-made reward.

This also works really well for older kids who are just starting out with Moneypants. They need assurance that mom and dad are serious. They want to know that their hard work will truly pay off.

A good way to develop this trust is to take your older kid shopping. Take your teenager to the store and buy him those new shoes he wants. Then put those new shoes into the prize bag. That way he knows he really can earn those shoes. They’re right there! You’ve already kept your promise to take him shopping.

The one mistake some parents make is giving away prize bag items for free. They will see their darling daughter work hard for a few days or even a few weeks and say, “They can just have that new dress from the prize bag.” Don’t do this! This is a major mistake.

Giving your kids things they haven’t earned totally undermines everything you’ve worked so hard to set up. You set up that they can buy the prize bag item when they’ve earned enough money. Stick to it. Keep your word. Your kids will appreciate it more when they’ve actually earned the item. They will trust you that you mean what you say.

The second use for the prize bag is for free stuff. In the past, we’ve talked about how free stuff can upend your system of supply and demand. See the blogs, “Declutter Your Home” and “Gifts and Presents”. The prize bag really helps avoid this problem.

For example, when our family gets a bag of free clothes, this is what we do. We give our kids 24 hours to sift through it. Any items they may want go into the prize bag. Everything else goes to Goodwill or charity. Once the items are in the prize bag, we think of it kind of like a going out of business sale. Everything must go! Our kids still have to pay for the items, but at greatly reduced prices. Typically, we use garage sale prices for how much to charge.

Sometimes two people may want the same thing. In those cases, you have at least three options:

That should help avoid fights about prize bag stuff.

Keep in mind, this does NOT apply to prize bag stuff you bought at the store. Those items were purchased for a specific person and should stay in the prize bag until that person earns it. You should not sell something that was intended for someone else. That will really destroy motivation to work and develop talents.

Going back to our blog, “Rethinking Gifts And Presents”, we argue that it’s a bad idea to accept stuff for free. The best idea is to pay something for free stuff, even if it’s only $1. It helps define the ownership and also cuts any potential strings that may be attached—even unspoken or unintended strings.

If, however, you forgot to pay for free stuff, here’s an idea. Use the money you get from selling the items to your kids to buy a thank you card and maybe a gift certificate.

No, it’s not miserly. Or mean. Or awful. In fact, it’s quite the opposite. There are some great benefits from charging money for free stuff:

When your kids first rifle through the free stuff, you filter out what they do and don’t want pretty quickly. The stuff they don’t want gets donated immediately. The rest goes into the prize bag. But what happens if the stuff is in the prize bag for a long time? It’s becoming apparent that nobody wants it.

A good idea is to set a time limit. Let your kids know that the item has been in the prize bag for two months and nobody has purchased it. If nobody gets it next week, it’s going to charity. If nobody objects, then it’s a safe bet that nobody wants it. But, if one kid pipes up and expresses a desire, it may be worth keeping. Maybe little Johnny really wants that old remote-control jeep but hasn’t made enough money yet to buy it.

The third use for the prize bag is for mastery milestone rewards. Mastery points are really hard to earn. And they take a long time. (See “Becoming A Master With Mr. Miyagi” for more on mastery.) A good idea to maintain motivation is to use the prize bag.

First, come up with a mastery milestone. For instance, it could be a new ballet shoes for Jessica. She will get those shoes when she earns 10 mastery points for her morning chores. Next, take Jessica to the store. Let her pick out the shoes she wants. Use the family money to buy those ballet shoes. Leave the price tag on. Then, when you get home, place those shoes into the prize bag. Let Jessica know they are for her. When she earns those 10 mastery points, she gets the ballet shoes.

This goes a long way to promote delayed gratification but also maintain long-term trust. Jessica may get discouraged over the next few months trying to earn those shoes. But, seeing them in the prize bag waiting for her—that may be enough to motivate her to keep going. She knows mom and dad support her in her efforts, too. After all, they already bought the reward. They fully expect her to earn it. What a boost of confidence!

So, we opted to help him get more motivated. We went online and found a really cool remote-control tank that he wanted. It had moving treads and a cannon that shot BBs. We bought it and set it on the shelf for him to see. Then we attached it as a reward for him. Every week he could go with a dry bed, he would get one mastery point. We made him a deal: if he could get ten mastery points, he could have the tank.

It took Blackstone about three months, but it totally worked. He went the ten weeks and earned that tank. In the process, he developed the habit of waking up and using the toilet at night. He no longer wet the bed. He was so proud of himself. Not only did he get rid of an embarrassing habit, but he achieved a goal he had set for himself.

For items that aren’t tangible, you can still put them in the prize bag. It will be more of a virtual prize bag, but the concept and benefits are the same. For example, if the mastery reward is a trip to Disneyland, you can print out a picture of the Disney castle and tack it on the wall. Or print out a pair of tickets for your kids to see. Maybe the mastery reward is a $3000 trip to Europe. You can transfer the $3000 to a specific savings account and let your kid see that account on a regular basis.

Prize bag has a lot of uses, and some pretty good benefits. It works well for helping family members make the connection between work, cash, and rewards. You can also use it for when you get stuff for free. And, it’s an excellent motivator for mastery points and long-term goals. It’s just one more tool to add to your Moneypants toolbox.

What about you? Do you have your own “family store”? Did we give you any new ideas? What ideas did we miss? Leave a comment below.